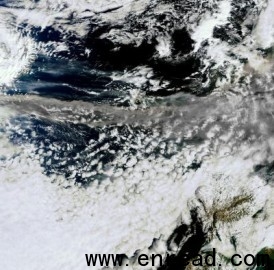 This image, acquired today by ESA's Envisat satellite, shows the vast cloud of volcanic ash（火山灰） sweeping across the UK from the eruption（爆发，喷发） in Iceland, more than 1000 km away. Carried by winds high up in the atmosphere, the cloud of ash from the eruption of the Eyjafjallajoekull glacier（冰河，冰川） in southwest Iceland has led to the closure of airports throughout the UK and Scandinavia（斯堪的纳维亚） , with further disruption（分裂，瓦解） in northern Europe expected later today. The ash, which can be seen as the large grey streak（条纹，线条） in the image, is drifting from west to east at a height of about 11 km above the surface Earth. It poses a serious danger to aircraft engines; hence（因此，今后） the airspace shut down.

The volcano erupted, for the first time since 1821, on 20 March and started erupting for a second time on Wednesday. The volcano, under the glacier ice, has caused ice melt and subsequent（后来的， 英语短文阅读，随后的） flooding and damage locally.

This image was acquired on 15 April 2010, at 13.25 (CEST) by Envisat's Medium Resolution Imaging Spectrometer (MERIS) while working in Full Resolution Mode to provide a spatial resolution（空间分辨率） of 300 metres.